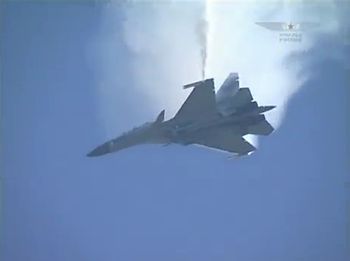 The Sukhoi Su-30 sub-family is a set of a twin-engine, two-seat supermaneuverable fighter aircraft including several variant designed to fullfil whishes of different Air Forces.
The Su-30MKK and the Su-30MK2, which were designed for and sold to China, and later Indonesia, Uganda, Venezuela, and Vietnam.
India ordered the multirole Su-30MKI ; its derivatives include the Su-30MKM (for Algeria), MKA (for Malaysia) and SM for Russia. These last ones have canards and should not be confused with the carrier capable single seat Sukhoi Su-33.

This page lists all films that feature the Sukhoi Su-30.
For other Sukhoi fourth-generation jet fighter, please use the dedicated category :