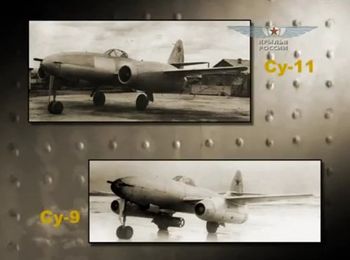 The Sukhoi Su-9 or Самолёт K (Russian: Aircraft K); (USAF/DoD designation: Type 8), was an early jet fighter built in the Soviet Union shortly after World War II. The design began in 1944 and was intended to use Soviet-designed turbojet engines. The design was heavily influenced by captured German jet fighters and it was subsequently redesigned to use a Soviet copy of a German turbojet. The Su-9 was slower than competing Soviet aircraft and it was cancelled as a result. A modified version with different engines and a revised wing became the Su-11 (Samolyot KL), but this did not enter production either. The Su-13 (Samolyot KT) was a proposal to re-engine the aircraft with Soviet copies of the Rolls-Royce Derwent turbojet as well as to modify it for night fighting, but neither proposal was accepted.

This page contains all films, TV series, and video games that feature the Sukhoi Su-9, Su-11, or Su-13.