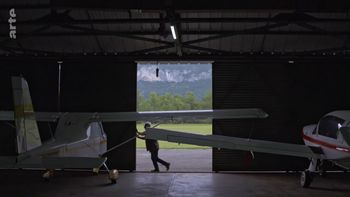 The Tecnam P92 is manufactured by Costruzioni Aeronautiche Tecnam (an Italian aeronautics manufacture founded in 1986). This two-seat ultralight monoplane made her first flight on 14 March 1993. This ultralight has a strut-braced wing and is a taildragger or got a tricycle landing gear (P92 Echo Light Classic) and variant P92 2000RG has a retractable landing gear.
It should not be confused with Tecnam P2004 which got a cantilevered wing (without strut) but on IMPDB both may be grouped in this categroy.

This page lists all films that feature a variation of the Tecnam P92 / Tecnam P2004.