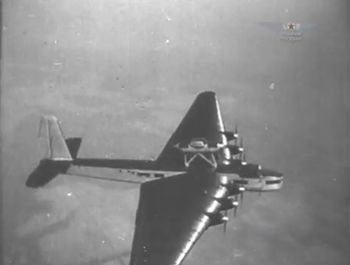 The Tupolev ANT-20 was the biggest plane of the thirties. Its wingspan of 63 meters (more 200 feet) was far ahead others giant aircrafts of the time. Using the corrugated sheet metal for skinning the airframe, Tupolev put eight engines of 900 hp each to power the Maxim Gorky (as the plane was christened). Designed for 8 crew members and 72 passengerrs, it made its first flight on 17th June 1934 but was eventually used for propaganda duties. So, on 18th May 1935, during a flypast over Moscow, a collision with an escort fighter led the both aircraft to crash, killing all on board.
Three more aircraft were son ordered with accomodation for 64 passengers only. With more powerful engines (1000 hp each), the two on the nacelle were no more needed and discarded. The designation was then ANT-20bis or PS-124 (from the factory 124 in charge of its assembly). The first aircraft eventually flew in spring 1939 and was used on regular flights between Russia and Uzbekistan during 18 months. Others command were already cancelled as like as further work for military use, considering its low speed (260 km/h) unsufficient to escape fighters. ANT-20bis crashed on 14th December 1942 near Tachkent after 272 flight hours.