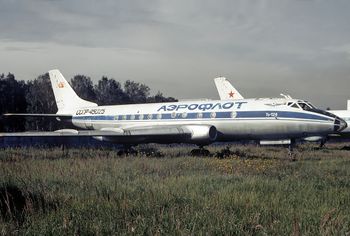 The Tupolev Tu-124 (NATO reporting name: Cookpot) was a 56 passenger short range twinjet airliner built in the Soviet Union. It was the world's first turbofan-powered airliner. Developed from the medium-range Tupolev Tu-104, the Tu-124 was meant to meet Aeroflot's requirement for a regional airliner to replace the Ilyushin Il-14 on domestic routes. Resembling a 75% scaled-down Tu-104, the two were hard to tell apart at a distance but it was not a complete copy of the Tu-104. The Tu-124 had a number of refinements, including double-slotted flaps, a large centre-section airbrake and automatic spoilers. Unlike the Tu-104, the wing trailing edge inboard of the undercarriage was unswept. 164 were built.

This page lists all films, TV series, and video games that feature the Tupolev Tu-124.