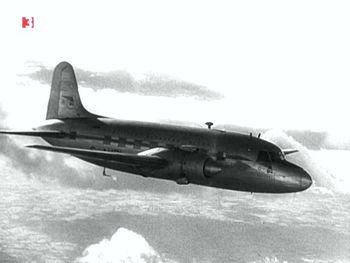 Vickers VC.1 Viking 1B seen in The Man Between.

The Vickers VC.1 Viking was a British twin-engine short-range airliner derived from the Vickers Wellington bomber and built by Vickers Armstrongs Limited. In the aftermath of the Second World War, the Viking was an important airliner with British airlines pending the development of turboprop aircraft like the Viscount. An experimental airframe was fitted with Rolls-Royce Nene turbojets and first flown in 1948 as the world's first pure jet transport aircraft. 163 aircraft were built and operated by many civil airlines and military forces throughout the world.

This page lists all films that feature the Vickers VC1 Viking .

The following 28 pages are in this category, out of 28 total.