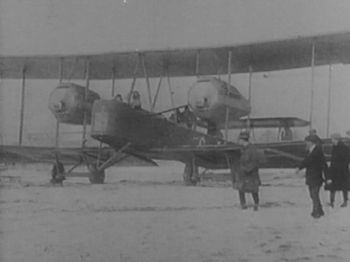 The Vickers Vimy was a British heavy bomber aircraft of the First World War and post-First World War era. It achieved success as both a military and civil aircraft, setting several notable records in long-distance flights in the interwar period, the most celebrated of which was the first non-stop crossing of the Atlantic Ocean by Alcock and Brown in June 1919. The Vimy Commercial was a civilian version with a larger diameter fuselage (largely of spruce plywood), which was developed at and first flew from the Joyce Green airfield in Kent on 13 April 1919. The prototype entered the 1920 race to Cape Town; it left Brooklands on 24 January 1920 but crashed at Tabora, Tanganyika on 27 February.A Chinese order for 100 is particularly noteworthy, although a failure to pay interest from April 1922 probably led to the order not being completed. Forty of the 43 built were delivered to China, but most remained in their crates unused, with only seven of these being put into civilian use. Fifty-five military transport versions of the Vimy Commercial were built for the RAF as the Vickers Vernon.

This page lists all films that feature the Vickers Vimy.