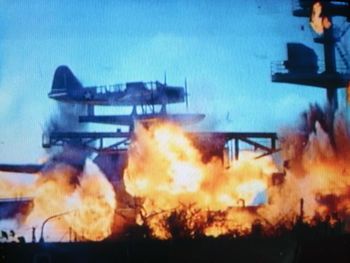 This observation floatplane was usually catapult-launched scout plane on battleships and cruisers of the US Navy, able to carry two light bombs. It could save downed airmen despite think for a crew of only two. The Marines and United States Coast Guard made a limited use of it. 100 were used by the Fleet Air Arm (UK) and a handfull served others operators from seven countries. It could also operate on fixed, wheeled, taildragger landing gear.
Four main variants were produced and the total production rises 1 519 aircrafts.

This page lists all films that feature a variation of the Vought OS2U Kingfisher.