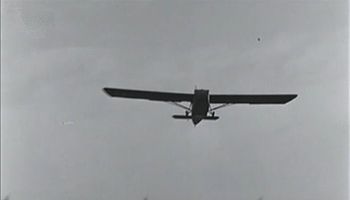 The Waco CG-4 (Hadrian when used by the RAF) was a transport and assault glider built by the Waco company, which has built a wide range of civilian biplanes before the war. The CG-4A could carry 13 troops and their equipment or a load of similar weight.
More of thirteen thousand of them were built.

This page lists all films that feature a variation of the Waco CG-4.