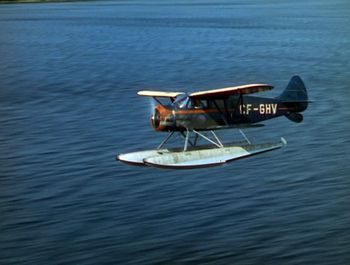 Waco ZQC-6 seen in Captains of the Clouds.

The Waco Custom Cabins were a series of up-market single-engined 4-5 seat cabin sesquiplanes of the late 1930s produced by the Waco Aircraft Company of the United States. "Custom Cabin" was Waco's own description of the aircraft which despite minor differences, were all fabric covered biplanes. The Waco Custom cabin series included all of the enlarged-cabin sesquiplanes from 1935 and can be further divided into six basic models, OC, UC QC, GC, RE and VN, with additional sub-types differing primarily in engine installation (indicated by the first letter of the designation or by a low dash number, i.e. -1, -2) and by model year (dash numbers -6, -7, -8). Letters were not used sequentially. Each basic type was offered with almost any engine the customer wished and designations were created accordingly, however some engines were more popular than others resulting in some types being offered, but never built. Due to the wide variety of engines already offered, it was both relatively easy and common to change the installed engine, resulting in a lot of confusion as to the correct designation to use for a specific airframe. More than 350 aircraft were produced.

This page lists all films that feature the Waco Custom Cabin series.