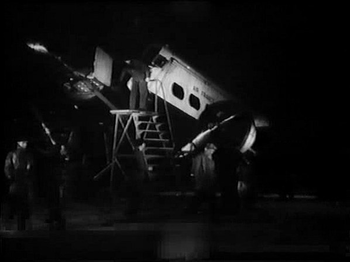 The Wibault 283T is the last step of a family of civil trimotor airliners. In fact, the story traced back in November 1930 with the development of type 280 backed by funds from the Penhoët shipyards (these shipyards, Saint-Nazaire-Penhoët, had an Aeronautical Design Bureau which merged with Wibault on March 1931). First french all-metal low-wing trimotor, the ten-passenger 280T was a success despite its unreliable Hispano (Wright licensed) engines. The Type 281T was powered by three Gnôme Titan (and was later upgraded to the 283T standard). When the 300 hp engines were replaced by 350 hp ones, Wibault had a commercial aircraft (the 282T) for ten passengers (and two crew members) faster than the French Air Force fighters ! Seven of them were built before the assembly line switched to the final 283T with a different tail (small additionnal stabilizers added for a better stability), a cooling ring even on the axial engine and a better range.

A total of ten Wibault 283T were built which leds to a grand total of 18 airframes.

This page lists all films that feature a variation of the Wibault 283T and its predecessors.