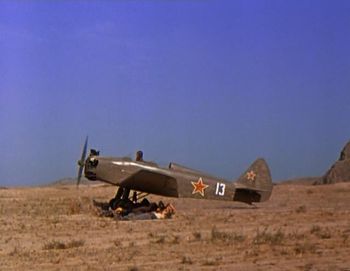 The Yakovlev UT-2 was a two-seater trainer aircraft used by the Soviet Air Force from 1937 until the Yakovlev Yak-18 replaced it in service of Air Forces of USSR and several countries with actually tied links : Romania, Yugoslavia, Hungary, Poland and Mongolia. As handling could be challenging for young pilots, the straight leading edge was changed in 1941 for a wing with a swept one in order to improve handling and stability.

More than 7 200 Yakovlev UT-2 have been built before production stopped in 1946.

This page lists all films that feature a variation of the Yakovlev UT-2.