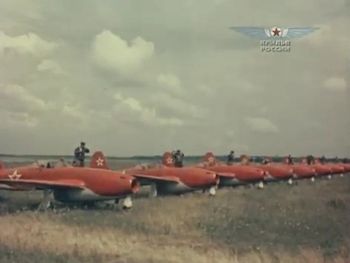 Yakovlev Yak-17 in Wings of Russia.

The Yakovlev Yak-17 (NATO reporting name "Feather”), was an early Soviet jet fighter. It was developed from the Yak-15, the main difference being tricycle landing gear. The trainer version, known as the Yak-17UTI, was the Soviet's most numerous and important early jet trainer. About 430 aircraft were built with the years 1948-49.

This page lists all films that feature a variation of the Yakovlev Yak-17.