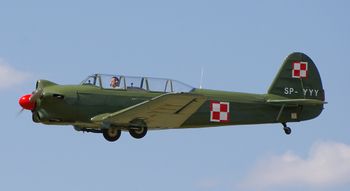 The Yak-18 is a Russian monoplane tandem two-seat military primary trainer aircraft built between 1946 and 1956 (and even 1958 in China). The basic variant with a five cylinder piston engine with a tight cover was follow by the Yak-18A variant with a more classic engine and a circular cover. The first ones have a tailwheel but the last ones have the tricycle landing gear. Variants exists as single seat aerobatic aircraft. Please note that a Yak-18T was designed and tested but not put into production. So, on IMPDB, this name is mainly if not only dedicated to the four-seat aircraft of the sixties.

This page lists all films that feature a variation of the Yak-18 and its chinese license-built Nanchang CJ-5.