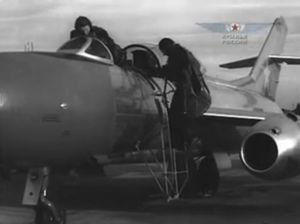 The Yakovlev Yak-25 (NATO designation Flashlight-A/Mandrake) was a swept wing, turbojet-powered interceptor aircraft and reconnaissance aircraft built by Yakovlev and used by the Soviet Union. Yak-25 started to equip air defence units from 1955. They were considered easy to fly and popular among the crews. Quite common were engine breakdowns, mostly due to the low engine position when on the ground, which demanded clean airfields, but thanks to twin-engine arrangement, few such failures were fatal. Their withdrawal started in 1963. The last Yak-25 interceptors were retired by 1967; the 'Mandrake' reconnaissance version soldiered on in various roles through the late 1970s. Like many other PVO interceptors of the Cold War era, the Yak-25M was not exported to the Warsaw Pact or other nations. There was also another aircraft named Yak-25E - a light fighter prototype of 1947. After it lost a competition with the MiG-15 and Lavochkin La-15, the first Yak-25 program was abandoned and the designation Yak-25 was re-used for a new interceptor.

This page lists all films that feature the Yakovlev Yak-25.