Difference between revisions of "Category:Yakovlev Yak-7" 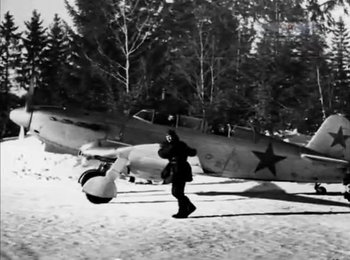 Yakovlev Yak-7V in Wings of Russia.

The Soviet Yakovlev Yak-7 was developed from the earlier Yak-1 fighter, initially as a trainer but converted into a fighter. As both a fighter and later reverting to its original training role, the Yak-7 proved to be a capable aircraft and was well liked by air crews. The Yak-7 was simpler, tougher and generally better than the Yak-1. The Yak-7 proved to be an effective close support fighter although the first two-seaters were considered nose-heavy, consequently, the factory introduced a rear cockpit fuel tank. Pilots complained about the fuel tank's vulnerability since it was unarmored, and it was usually removed in the field. There were constant changes to the design based on combat observations including a definitive single-seat variant, the Yak-7B, which was produced in large numbers. A total of 6,399 were built.

This page contains all films, TV series, and video games that feature the Yakovlev Yak-7.