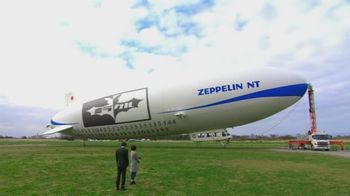 The Zeppelin NT is an airship which made its maiden flight in 1997. Despite designed by a new company (Zeppelin Luftschifftechnik GmbH), this new class of helium-filled airships is mainly different of their famous forerunners by its structure (semi-rigid airship). Following successfull trials during 2000, a small serie of five airframes was built with two of them sold in Japan. This 75 meters long airship could carry twelve passengers with two crew members.

This page lists all films that feature a variation of the Zeppelin NT.