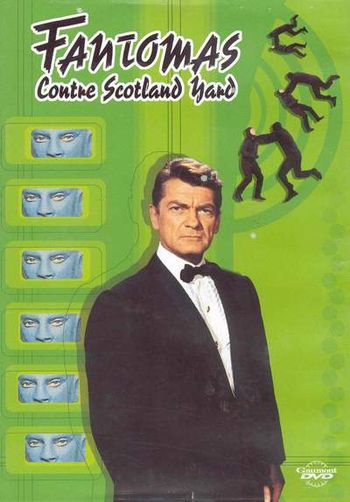 
Fantômas wants to collect money from scottish rich' for letting them live. The French inspector (Louis de Funes) comes to a scottish castle to protect the owner, Lord Mac Rashley

Nice Vickers 806 Viscount of BEA-British European Airways landing at Aéroport de Paris-Le Bourget (though its meant to be shot at a London airport).

On the right, at Aéroport de Paris-Le Bourget, a Douglas DC-4-1009 or Douglas C-54A Skymaster of Air France, as this company operated both.

Folland Gnat T.1 from the RAF's first Gnat-equipped team, the "Yellowjacks" from No 4 FTS. In 1965, the aircraft were painted in red and became the RAF aerobatic team Red Arrows.

Born as Hunting Percival Jet Provost, with inaugural flight in 1950, it becames BAC Jet Provost when this manufacturer merged to the British Aircraft Corp. in 1960.
The "Red Pelicans" arobatic team performed with six aircraft on 1963 and 1964 only. This team was issued from the Central Flying School, RAF.

Supersonic interceptor English Electric Lightning used by Royal Air Force from 1960 to the late 70’s.
This aircraft worn the code XP697. Look the discussion tab about which mark it could be. Probably RAF or manufacturer footage.

Used by Fantomas to escape from the castle.