Difference between revisions of "GoldenEye" 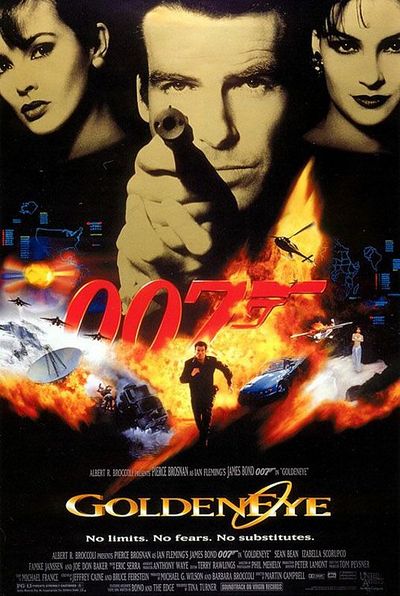 Still in development and years before entering service, this prototype of the Tiger attack helicopter plays a key role in Goldeneye. During its demonstration in Monaco, it is stolen by Xenia Onatopp and her Janus colleagues.

"What you are about to see in operation is Europe's answer to the electronic battlefield: the first working prototype of the Tiger helicopter. Uniquely maneuverable, the Tiger not only uses stealth technology, but it is the only helicopter to be hardened against all forms of electronic interference, radio jamming and electromagnetic radiation."

She flies to a Siberian military facility with General Ourumov, kills everyone in side and activates the Goldeneye satellite weapon, which destorys anything with a electrical circuit, except the Tiger which is protected against the Goldeneye's electromagnetic pulse.

Later when Bond meets the mysterious head of Janus, he is knocked out and tied up inside the Tiger's cockpit with Natalya. Its missiles are set to launch and are targeted at the Tiger itself, but seconds before they hit, Bond manages to press the ejector seat button with his forehead.

Only in the Monaco scenes do you the real thing, afterwards full-size and scale models are used.

In the pre-credits action sequence, Bond manages to escape the exploding chemical weapons factory in this.

When a nearly-dead victim of the massacre at Severnaya triggers the alarm, these three MiGs are scrambled. As soon as they reach the area, the Goldeneye's electronmagnetic pulse is fired and two of them explode in mid-area and the third crashes into the satellite dish. No real planes are used here, just models and CGI.

Alec and Xenia escape from the missile train.

Bond trades his BMW Z3 for this. While flying over a lake searching for Janus satellite dish, it gets hit by a surface-to-air missile and Bond has to make a crash-landing.

While Bond and Natalya are passed out in a jungle clearing after the plane crash, Xenia abseils from this helicopter and attacks Bond, but he shoots it down with her AK-47 and she yanked into the air and crushed to death against a tree.

During their final confrontation on the antenna cradle, this helicopter arrives to help Alec but Natalya puts a gun to the pilot's head. Alec is momentarily distracted and Bond kicks him over the edge. Bond grabs onto the landing skid and they fly away just before the whole antenna crable blows up and crashes onto the dish.

At the end, Jack Wade turns up with a group of US Marines to pick Bond and Natalya up. "Maybe you two can finish debriefing each at Guantanamo."