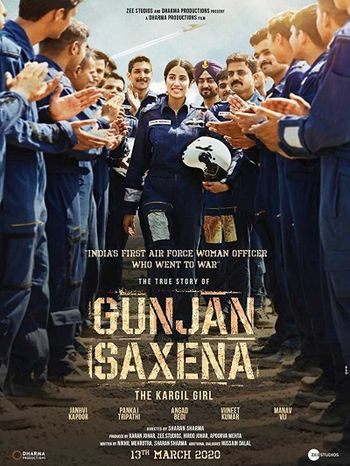 One of the two first Indian women to get her wings. Destiny made Gunjan going first on a battle field. She first did work hard and changed men's spirit !

At the age of eight, Gunjan made a flight and was able to watch the cockpit. But why do we see a twinjet ...

Not the real gate of the Air Force Academy (?)

Two Avro Lancaster (seen in the U.K. during Southport Airshow 2014 ?) above a North American P-51D Mustang in the colours of "Ferocious Frankie" (code B7-H) flown by Major Wallace E. Hopkins, 374th Fighter Squadron, 361st Fighter Group, 8th Air Force, USAAF.
Real Gunjan Saxena was pilot between 1994 and 2004 ... according the screenplay, she's reading such magazine in her early teens so around 1990 not 2014.

Various toys and wallpapers : among them, two black and white pictures of Boeing 747.