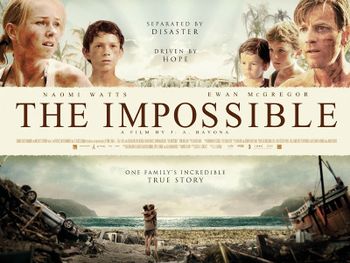 Promotional poster for The Impossible


On 26th December 2005, the worst tsunami in history hit Thailand and other South-East Asian countries. Based on the true story of the Belón family, The Impossible tells the experience of a mother, father and 3 sons as they fight for survival in a post-disaster foreign country and attempts to reunite the family as one.

Flying in the far distance.

Mostly blocked by the blue truck.

Global Express (front left) has markings "NKOTB" - most commonly referring to the pop band "New Kids on the Block". Possibly a jet used for touring, but no evidence found to support this. Airbus A320 (back right and far background) both belong to Thai AirAsia.