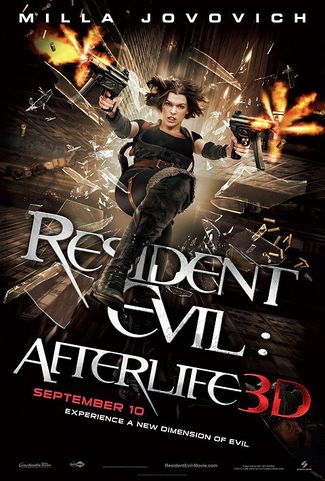 After dealing her revenge against the Umbrella Corporation and its leader, Chairman Wesker, Alice flies to what she thinks is a town called Arcadia in Alaska in search of her fellow survivor Claire Redfield's group, finding only their abandoned helicopter - and an airplane graveyard. Alice must discover what happened to her friends, but only with the help of some new ones.

Seen used by he Umbrella Corporation. Wesker uses one as a getaway vehicle in Tokyo, and again aboard the Arcadia. At the end of the film, several of these carrying Umbrella troops are shown flying towards the Arcadia.

Alice uses this plane to fly to Alaska, and then to California. It is later stolen by Bennett who crashlands it on the deck of the Arcadia.

The discarded planes of various people lured to "Arcadia," Alaska, which is actually a ship, not a town. Various kinds. Identify if possible.

Two of these are seen in the airplane graveyard by Alice.

Umbrella helicopter used by Claire's group to fly to Alaska. Seen only in a flashback. Registration N450CC, Serial 1682.

This helicopter incorrectly stands in for the AS350B2 Ecureuil when Alice finds it abandoned in Alaska. False Registration N450CC.