This movie has a lot of aviation action. Most of them are wartime footages (Pacific Theater during WW2 but too some limited shots from MTO / ETO; several are shot during the Korean War), some "propaganda" material from U.S.S.R. and U.S. Air Force Promotional Film. Editing is dynamic and some shots are quite short : I hope I miss no one. LVCDC 17:48, 10 April 2014 (MDT)

As the story is based on the fighting between communist forces and the U.S.A., aggressors use some soviet airplanes but american ones too ! This is not surprising for the Boeing B-29 / Tupolev Tu-4. It's more surprising for other bomber / fighter types (including old retired or japanese ones !). One thing ease to know who is piloting : communist crews wear a leather helmet.
One interesting thing is the futuristic TV big flat screen .... in 1952 ! A time when television was quite rare and of small size ! (have a look at wikipedia [[1]] for an example) ! LVCDC 03:50, 11 April 2014 (MDT)

The dynamic editing doesn't help to identify sources but for these twin engined japanese aircraft, here is the original footage from the The Last Bomb (look at the last screenshot of this 1945 movie). Between the two screenshots, the dogfight lasts 30 seconds, mostly dedicated to a long burst of a N-A P-51 Mustang. 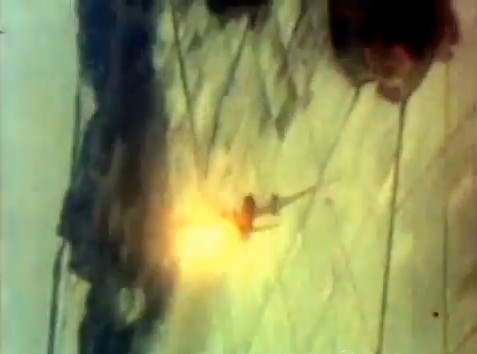 The original color footage as seen in The Last Bomb.