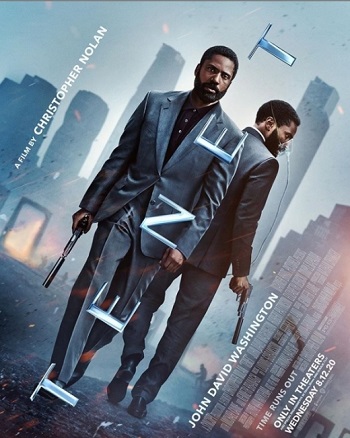 Armed with only one word, Tenet, and fighting for the survival of the entire world, a Protagonist journeys through a twilight world of international espionage on a mission that will unfold in something beyond real time.

A Spirit Airlines A320 at the jetway with an Alaska Airlines Boeing 737 behind at what's supposed to be Oslo Airport (actually filmed at KLAX).

False registration LN-WTJK and fake airline Norskfreight. Actually a former Cathay Pacific Cargo bird, last registration B-HMD (MD still on front gear door), c/n 22105/435 built in 1980. Aircraft has been in storage at Southern California Logistics Airport (VCV/KVCV) since 2009. It was repainted and deliberately crashed into a building on-site for the film.

In the background, ex-Singapore Airlines birds lined up in storage at Southern California Logistics Airport.

Seen aboard Sator's yacht, the Cloud Nine. Pictures of the yacht available online generally show it with a Eurocopter EC130, so this heli doesn't seem to be related to its real-life operation.

Registration OM-AVS, c/n 98839307 operated by UTair Europe. Typically seen with a yellow, black, and red livery, it was repainted with a partial digital camouflage for filming, and its rear cargo doors were removed for its first scene.

At far left in the background - Ex-Ethiopian Airlines Cargo bird at Southern California Logistics Airport (standing in for Oslo Airport). Most likely registration N546BC (ex ET-AML), c/n 48758/615, as the other ex-Ethiopian MD-11F stored at KVCV (N545BC / ET-AND) was reported to have been broken up in 2018.

Four Chinooks from Billings Flying Service were leased for the film.