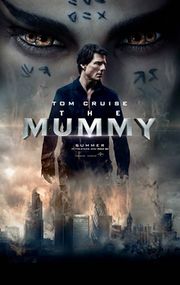 The film stars Tom Cruise as a US soldier who accidentally unearths the ancient tomb of an entrapped Egyptian princess.

Used by U.S. Army. One is used by Colonel Greenway while second is used to transport sarcophagus to improvised runway.

Used by U.S. Army to transport sarcophagus to UK but it crashes in Oxford.
Outside of a C-130 H (four blade propeller) but glass cockpit similar to a C-130J despite the lack of HUD (Head Up Display).