Two Weeks in Another Town 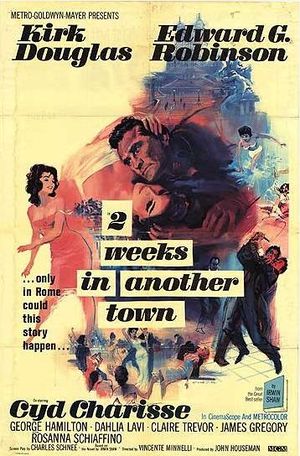 A down on his luck has-been actor fails to get the leading role in a lavish costume drama but when the director has a heart attack he takes over in the chair, succeeding in getting the film back on track.

Of Alitalia-Linee Aeree Italiane. The aircraft is named Amerigo Vespucci after the explorer.
It's registration was I-DIWA (Serial 45598), and entered service with Alitalia in 1960 till 1977. Same aircraft in other works IMPDb: Frequently Seen Aircraft (Civil Fixed-Wing).