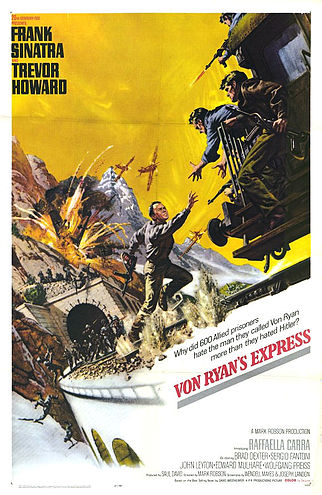 As the Allies take control of Italy during WWII, the Germans prepare to transfer the occupants of a POW camp to Germany. The POW's have other plans, and attempt to hijack the train and take it to Switzerland.

As the film begins, Col. Ryan is shot down over Italy.

Ryan's damaged P-38 flies over an Italian city, as portrayed by a real P-38 or a reasonably accurate model.

The wrecked Lightning appears to be a prop

Although the shape looks good for a P-38, the markings are an inaccuate mix of pre-war tail stripes and post 1947 USAF insignia on the wings

A flight of Nord 1002 Pingouins plays the role of Bf 109s sent to intercept the hijacked train.

The cockpit canopies of the four seat Pingouins were painted to approximate the rear decking of a Bf 109 cockpit...

... while the canopy of the cockpit mockup used for closeups, which more accurately represents a real Bf 109 cockpit, was repainted to approximate the repainted Pingouin canopies!

A number of shots appear to use special effects models. In any case, the paint schemes are spurious and do not represent anything worn on a Bf 109.