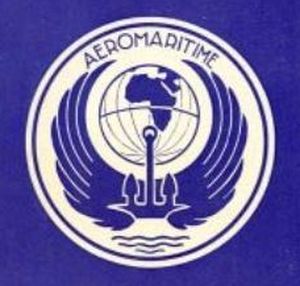 Compagnie Aéromaritime d'Affrètement operated as Aéromaritime was founded in 1966 as a subsidiary of the French airline UTA re-using the 1939 logo of Chargeurs Réunis pre-WWII era. The start of flight operations took place on January 11, 1967 with two machines of the type Douglas DC-6 , which were taken over by the parent company. If necessary, the company briefly leased additional aircraft of the types Caravelle and DC-8 from UTA's inventory.
In November 1971, the company received the first Super Guppy cargo plane for use on behalf of the aircraft manufacturer Airbus to transport large components between different sites of the group. Freight transport quickly became the company's most important business area. In addition, Aéromaritime continued to fly tourist charter services until the end of December 1977, but exclusively with UTA machines rented for this purpose . In July 1982 and July 1983, the company took over another Super Guppy . The company used the four aircraft marked Airbus Skylink until 1989 and then sold them to the newly founded Airbus subsidiary Airbus Inter Transport . At the beginning of 1990 Air France bought the airline UTA and its subsidiary Aéromaritime which was renamed Aéromaritime International . The company ceased operations in October 1991 .