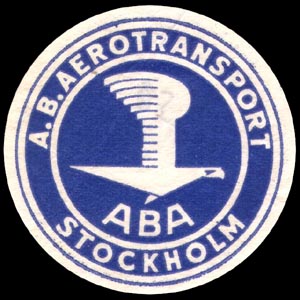 AB Aerotransport (ABA) was a Swedish airline, established in 1924 under the name Aktiebolaget Aerotransport. It started flights throughout Scandinavia and Northern Europe with several aircraft as Junkers F 13, Junkers W 33/34, Junkers G 23/24, and Fokker F.XII for the longest routes. In 1937 ABA became the second European operator of the Douglas DC-3 after KLM. In June 1948, the government-owned ABA and privately owned SILA were merged on a 50-50 basis, to form a new airline re named ABA-Swedish Air Lines. SILA had become the Swedish part of SAS in 1946, that was at that time only a co-operation between DDL in Denmark and DNL in Norway. On October 1, 1950, representatives from the three airlines signed a consortium agreement where they appointed SAS-Scandinavian Airlines System to run the airline operations and the three national airlines only to be holding companies.

This page lists all films, TV series, and video games that feature aircraft of AB Aerotransport.