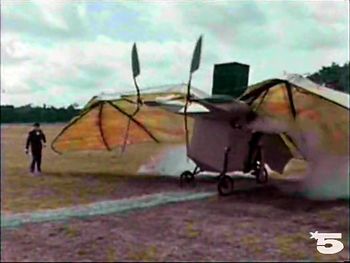 The Ader Avion III (also known as Aquilon - a Roman god of cold winds -) was designed by the French engineer Clément Ader between 1892 and 1897. Its story is subject of controversy as most of the documents were classified a century long and lots of data were in fact hypothesis. As the designer worked financed by the French War Office, and despite original patents, the secret trials have had few witnesses. Clément Ader worked on original concepts never used then like wing's bat, four blades (like feathers) propeller, etc... The twin engined machine, devoyed of control surfaces except a rudder, could have jumped several hundred feet but failed to attract interest of military high ranking officials during trials on October 1897.

This page lists all films that feature the Avion III.