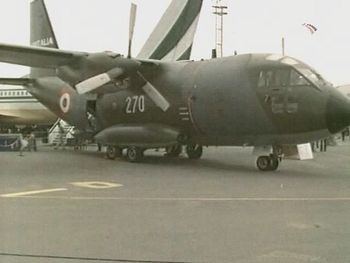 The Aeritalia G.222 is a medium-sized STOL military transport aircraft which makes its first flight on 18th July 1970. The first production aircraft entered Italian service in April 1978. Five foreign Air Forces ordered it before Libya expressed the need of twenty airframes. This deal was embargoed by the U.S. Government as the G.222's engines were the turboprop General Electric T64. In order to avoid such further event, Alenia (which succeeded to Aeritalia) developped the C-27J powered by the Rolls-Royce Tyne engine and other US supplied equipment were replaced by European equivalents. On the 111 Aeritalia G.222 built, ten were bought by USAF which baptised them C-27A (1990–99). From 1997, the highly redesigned C-27J Spartan is built (nearly 50 airplanes) and is put into service with several Air Forces (including the ANG and USAF !).

This page lists all films that feature the Aeritalia G.222 / C-27A or Alenia C-27J Spartan.