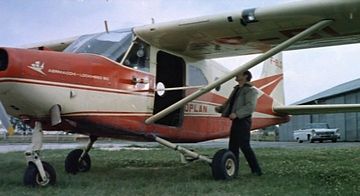 The Aermacchi AL-60 was designed by Al Mooney for Lockheed. The first flight occured on 15 September 1959 but after two prototypes, Lockheed has given up to manufacture this tricycle high wing light aircraft able to transport seven passengers. Eventually, several airframes were assembled in Mexico (18 LASA-60 for the Mexican Air Force), Argentina and built under license by Aermacchi (AL-60B and AL-60C) and slighty redesigned (to a taildragger arrangement) by the other licensed-builder, the South African Atlas (40 Atlas C4M mainly for the South African Air Force). Its ultimate development was the Northwest Ranger, which has main landing gear leg fairings.

This page lists all films that feature a variation of the Aermacchi AL-60, LASA-60, Atlas C4M Kudu or Northwest Ranger.