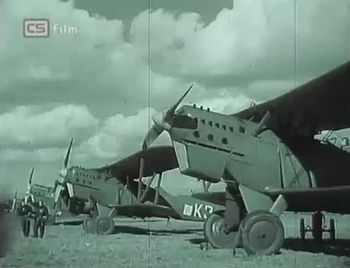 The Aero A.100 was produced by the company Aero Vodochody. This biplane was a light bomber and reconnaissance aircraft built in Czechoslovakia during the 1930s. Further studies led to the A.101, a scaled-up airframe powered by an engine with an extra of 250 hp (from 740 to 990 hp) without improving the performance. Spanish Republican ordered 50 airframes but some felt between Nationalists hands so the type soldiered on for both sides. Another engine configuration was ordered by the Czechoslovak Air Force as Ab.101 but it saw limited service due to the Munich Agreement.

This page lists all films that feature a variation of the Aero A.100 family.

Pages in category "Aero A.100 and derivatives"