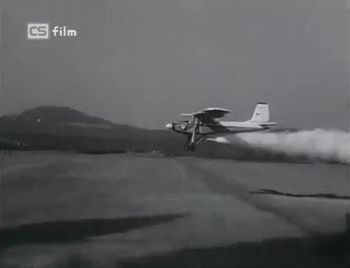 The Aero L-60 Brigadýr was produced by the Czech company Aero Vodochody. The company has had a solid experience in the STOL airframe following prduction of the Fieseler Fi 156 Storch and a post war licensed built variant, the Aero K-65 Čáp. Ten years after this last airframe assembly, a requirement for a more capable aircraft led to the Brigadýr. Sold on both military and civilian market, the type was upgraded with radial AI-14RA engine from 1975. A great number were used as crop spraying aircraft but air ambulance and glider tug were too a common use of the Brigadýr.

This page lists all films that feature a variation of the Aero L-60 and L-160.