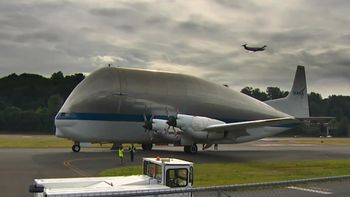 The Aero Spacelines Super Guppy is a large, wide-bodied cargo aircraft that is used for hauling outsize cargo components. It was the successor to the Pregnant Guppy, the first of the Guppy aircraft produced by Aero Spacelines. Five were built in two variants, both of which were colloquially referred to as the "Super Guppy".

The Super Guppy is "the only airplane in the world capable of carrying a complete S-IVB stage", the third stage of the Saturn V rocket. The Super Guppy performed this role several times during the Apollo program.