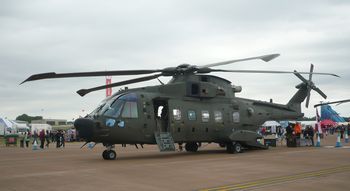 The AgustaWestland AW101 is a medium-lift, multi-role helicopter originally designated EH101. It was developed as a joint venture between Agusta and Westland Helicopters, known as EH Industries. It entered service in 2000 and is known as 'Melin' by many military operators.

This page lists all films that feature a variation of the AgustaWestland AW101.