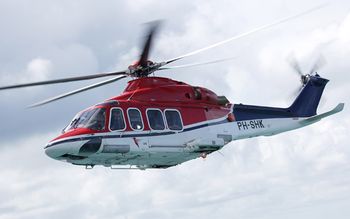 The AgustaWestland AW139 is a 15-seat medium sized twin-engined helicopter developed and produced principally by AgustaWestland. It is marketed at several different roles, including VIP/corporate transport, offshore transport, fire fighting, law enforcement, search and rescue, emergency medical service, disaster relief, and maritime patrol. In addition to AgustaWestland's own manufacturing facilities in Italy and the United States, the AW139 is produced in Russia by HeliVert, a joint venture between AgustaWestland and Russian Helicopters.

The AW139 was originally designed and developed jointly by Agusta and Bell Helicopters and marketed as the Agusta-Bell AB139, it was redesignated the AW139 when Bell withdrew from the project. Since entering service in 2003, the AW139 has become one of AgustaWestland's most influential products; it has been subsequently developed into two enlarged medium-lift helicopters, the military-orientated AW149 and the AW189 for the civil market.

This page contains all films, TV series, and video games that feature the AgustaWestland AW139.