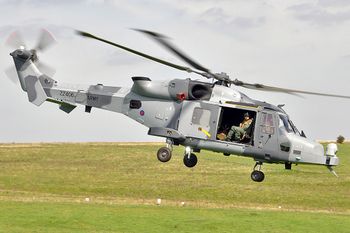 The AgustaWestland AW159 Wildcat (previously called the Future Lynx and Lynx Wildcat) is an improved version of the Westland Super Lynx military helicopter designed to serve in the battlefield utility, search and rescue and anti-surface warfare roles. In British service, common variants are being operated by both the Royal Navy and British Army to replace their ageing Lynx Mk.7/8/9 rotorcraft. The AW159 has also been offered to several export customers, including orders by Republic of Korea Navy and the Philippine Navy.

This page contains all films, TV series, and video games that feature the AgustaWestland AW159 Wildcat.