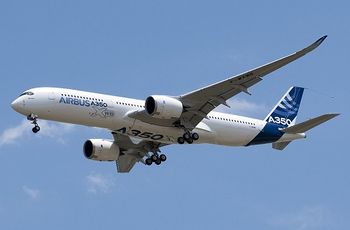 The Airbus A350 XWB is a family of long-range, twin-engine wide-body jet airliners developed by the European aerospace manufacturer Airbus. The A350 is the first Airbus aircraft with both fuselage and wing structures made primarily of carbon fibre reinforced polymer. Its variants seat 315 to 369 passengers in typical seating layouts. The A350 is positioned to succeed the A340 and to compete with the Boeing 787 and 777.

The A350 was originally conceived in 2004 as a pairing of the A330's fuselage with new aerodynamics features and engines. In 2006, Airbus redesigned the aircraft in response to negative feedback from several major prospective customers, producing the "A350 XWB" (eXtra Wide Body). Development costs are estimated at €11 billion (US$15 billion or £9.5 billion). As of February 2019, Airbus had received 893 orders for A350s from 51 customers worldwide. The prototype A350 first flew on 14 June 2013 from Toulouse, France. Type certification from the European Aviation Safety Agency was received in September 2014 and certification from the Federal Aviation Administration two months later. On 15 January 2015, the A350-900 entered service with its launch operator Qatar Airways; the A350-1000 did so on 24 February 2018 with the same airline.

This page contains all films, TV series, and video games that feature the Airbus A350.

Pages in category "Airbus A350"