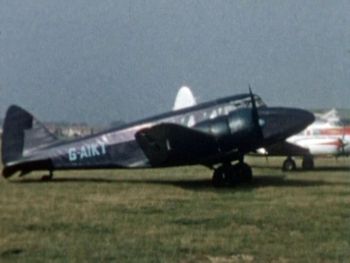 The Airspeed Consul is a twin-engined light transport aircraft and affordable airliner designed and produced by the British aircraft manufacturer Airspeed Limited. Introduced during the immediate post-war period, it was a straightforward conversion of surplus Airspeed Oxford military trainers that had been extensively used during the Second World War. Early on in the conflict, Airspeed's management recognised that the vast numbers of Oxfords then in military service would need a new purpose as an inevitable consequence of demobilisation greatly reducing military demand for the type. Upon the war's end, the company acquired numerous Oxfords from the British government and begun converting the type for the needs of civilian customers. The first aircraft, G-AGVY, was certified for operations on March 1946; a further 50 aircraft would be converted over the following months. The Airspeed Consul was developed into various models, each being typically suited for a particular role, such as an air ambulance, freighter, executive transport, and airliner. Airspeed marketed the type particularly heavily towards private owner-pilots and businesses, the latter being an atypical choice for the era. A number were also produced with armaments, having been militarised and exported to multiple overseas air forces. By the end of production, 162 Consuls had been produced.

This page lists all films that feature the Airspeed Consul.