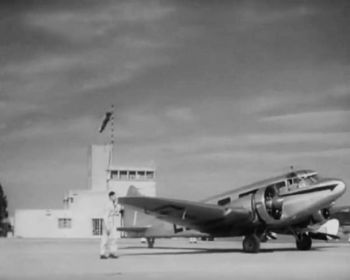 The Airspeed AS.6 Envoy was a British light, twin-engined transport aircraft designed and built by Airspeed Ltd. in the 1930s. The Envoy was a low-wing monoplane of all-wood construction apart from fabric covered control surfaces. It had a rearward retracting main undercarriage with a fixed tailwheel. The aircraft was built in three series, the Series I was the initial production variant which did not have trailing-edge flaps, seventeen built. Thirteen Series II variants were built with split flaps and the Series III (19-built) was similar but had detailed improvements. Each series of the Envoy was sold with a choice of engines including the Armstrong Siddeley Cheetah V or Armstrong Siddeley Lynx IVC radial engines. These different engines were housed under a variety of cowlings, mostly short chord Townend rings but also wider chord cowlings with and without blisters for cylinder heads. 60 aircraft were produced.

This page lists all films that feature the Airspeed Envoy.