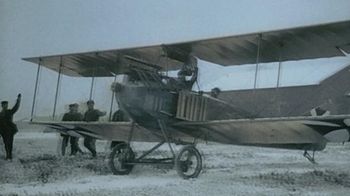 The Albatros B.I was a German military reconnaissance aircraft designed in 1913 and which saw service during World War I. It was a two-seat biplane of conventional configuration that seated the observer and the pilot in separate cockpits in tandem. The wings were originally of three-bay design, but were later changed to a two-bay, unstaggered configuration. A floatplane version was developed as the Albatros W.I.

This page lists all films that feature a variation of the Albatros B.I.