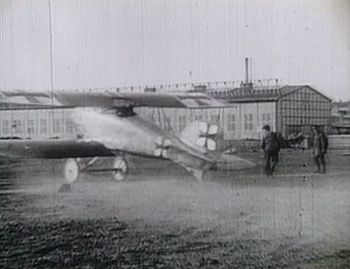 The Albatros D.II was a German fighter aircraft used during World War I. After a successful combat career in the early Jagdstaffeln, it was gradually superseded by the Albatros D.III. Albatros designers Thelen, Schubert and Gnädig produced the D.II in response to pilot complaints about poor upward vision in the Albatros D.I. The solution was to reposition the upper wing 36 cm (14 in) closer to the fuselage and stagger it forward slightly. Rearrangement of the cabane struts also improved forward view. The D.II otherwise retained the same fuselage, engine installation, and armament as the D.I. Basic performance was unchanged. Idflieg ordered an initial batch of 100 D.II aircraft in August 1916.

This page lists all films that feature the Albatros D.II.