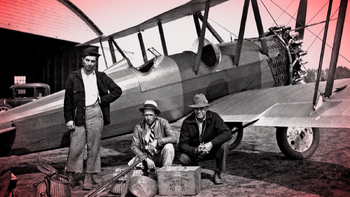 Alexander Aircraft Company designed the Eaglerock in 1925 because the mother company could not buy aircraft as needed. The aircraft was a success with more 800 airframes built until the company went bankrupt in August 1932 (others models were all monoplanes and built only in a very limited numbers). This first project (a tandem two-seat biplane) was the most successful and has more a dozen variants based on a variety of engines.

This page lists all films that feature a variation of the Alexander Eaglerock.