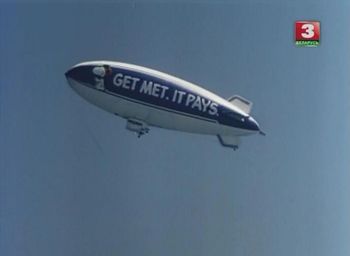 American Blimp Corporation (ABC) is an American privately owned company that is the largest manufacturer of blimps in the United States. Founded in 1987, the company's first lightships designs are the A-60 and derivative A-60+.
The A60+ first flight dated back to 1989 and 18 of this advertising airship were built by 2003. Length is 39 meters (128 feet) and volume is 1900 m3 (67 097 cu ft).
Able to lift off with three passengers and a pilot, the type suffered a drama on 14 June 2011, when the "Spirit of Safety 1" (serial number 003) crashed and burned on the Reichelsheim airfield during landing. The pilot Michael Nerandzic was able to ordered the passengers to jump then quickly lift off to reach a safer zone but flames reached the airship's envelope and the ship crashed in a nearby field killing him.

This page lists all films that feature a variation of the American Blimp Corporation A-60 and A60+.