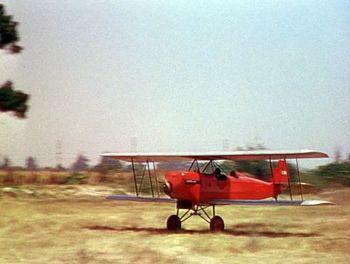 American Eagle A-1 seen in Singin' in the Rain.

The American Eagle Aircraft Corporation is a short-lived aircraft design and manufacturing company which first product was the American Eagle A-1. Despite its success (more 500 airframes built in just six years which put it as the world's third-largest aircraft production company in 1929), the Great Depression led to a bankruptcy in 1931 after just eight Approved Type Certificates delivered. An ultimate low-cost design named Eaglet and sold by the actual American Eagle-Lincoln Aircraft Corporation was unable to provide more success.