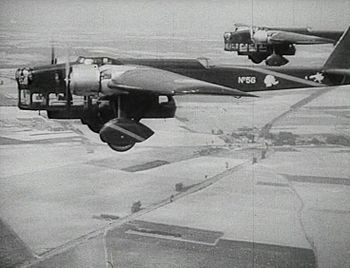 The Amiot 143 was a late 1930s French medium bomber designed to meet 1928 specifications for a bomber capable of day/night bombing, long-range reconnaissance and bomber escort. The Amiot 143M entered service in July 1935, with deliveries continuing in 1936 and 1937. About six were going to be delivered to the Spanish Republican Air Force at the beginning of the Spanish Civil War. There is no evidence, however, that these obsolete French bombers flew over Spain during the Civil War. By the time the last deliveries were made in March 1938, the Amiot was quite out of date and began to be replaced by modern aircraft such as the Bloch MB.131. Nevertheless at the outbreak of the Second World War, Amiot 143s equipped 5 metropolitan groupes together with a single African based groupe. The last Amiot 143M was retired from service in February 1944. A total of 138 aircraft had been built.

This page lists all films that feature the Amiot 143.