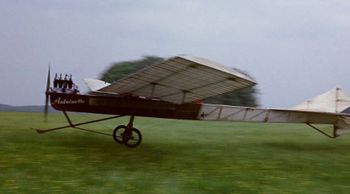 Antoinette IV Replica seen in Those Magnificent Men in Their Flying Machines or How I Flew from London to Paris in 25 hours 11 minutes.

The Antoinette IV was an early French monoplane. It was a high-wing aircraft with a fuselage of extremely narrow triangular cross-section and a cruciform tail. Power was provided by a V8 engine of Leon Levavasseur's own design driving a paddle-bladed tractor propeller. Lateral control was at first effected with large triangular, and shortly afterwards trapezoidal, ailerons hinged to the trailing edge of the wings, although wing-warping was substituted at an early stage in flight trials, and in this type proved more effective. On 19 February 1909, the Antoinette IV flew 5 km (3.1 mi) at Mourmelon-le-Grand, and on 19 July, Hubert Latham attempted to cross the English Channel in it, covering 11 km (6.8 mi) out of Sangatte before making a forced water landing due to engine failure.

This page lists all films that feature the Antoinette IV.