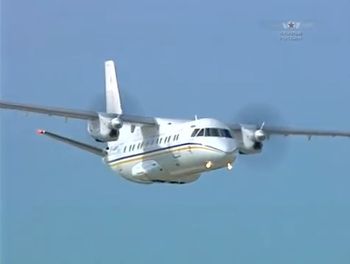 The Antonov An-140 is an Ukrainian turboprop regional airliner which maiden flight was on 17 September 1997. Designed to be the successor to the Antonov An-24, this high-wing aircraft is a versatile airframe able to be used for commercial flights (for VIP's or up to 52 passengers) or as a light military transport aircraft. Future is not bright following the 2014 crisis between Ukraine and Russia : this main market has just ordered a dozen aircraft awaiting their own design (the Ilyushin Il-112).
The IrAn-140 is a license-built version of the An-140, assembled by HESA in Iran.

Only 35 Antonov An-14 were built fifteen years after the first flight.

This page lists all films that feature a variation of the Antonov An-140.

Pages in category "Antonov An-140"