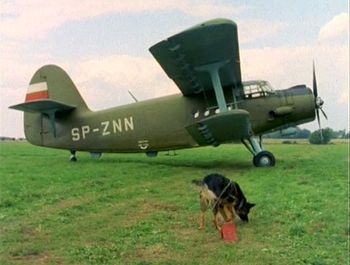 The Antonov An-2 was a single-engined bi-plane first built in 1946 in the Soviet Union. It has a variety of uses although primarily agricultural and utility roles both as a civil and military aircraft. Serial production of the AN-2 aircraft was carried out like this :
1949-1963 - aircraft plant #473 in Kiev where 3,339 aircraft were produced;
1959-2002 - WSK PZL-Mielec aircraft plant in Poland produced 11,915 machines.
Several hundreds were too produced in China by Nanchang and/or Shijiazhuang as Y-5.

This page lists all films that feature a variation of the Antonov An-2.

Pages in category "Antonov An-2"

The following 97 pages are in this category, out of 97 total.